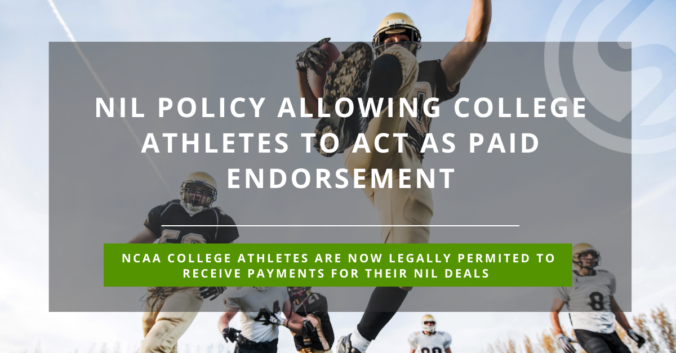 NCAA college athletes are now legally allowed to receive payments for their NIL deals (name, image and likeness) receiving compensation for their sponsorships, which they’ve long been barred from.

→ Shortcut: Click here if you want to see our portfolio of NCAA athletes (and teams): NCAA Athlete Sponsorships

What does the NCAA Nil Legislation mean and why is it so important for college athletes?

For decades now have NCAA college athletes been prohibited from monetizing endorsement deals and sponsorships. But starting from July 1st, the new NCAA NIL policy became official. A policy that changes the world of college sports and impacts all student athletes across the United States, who are entering the era of financial freedom.

Hundreds of thousands college athletes from all three divisions are benefiting from the new regulations, allowing students to legally accept NIL payments and giving student athletes an opportunity to make money in an industry that generates billions of dollars.

According to this new state law, college athletes are permitted to obtain a “NIL compensation” for sponsored content on social media, promoting brands and products using their name, image and likeness without facing penalties such as scholarship reductions or threats to their eligibility. So unlike previous legislation, NCAA athletes will now be able to accept marketing deals, hire agents, sign sponsorships and get paid money for work they produce, which is something that hasn’t happened in the past.

How do brands benefit from the new NCAA NIL policy?

That college athletes can now profit from sponsorships and endorsements is also opening a new avenue for marketers who regularly seek to engage with sports and culture. The development represents one of the best new sponsorship opportunities to emerge in the past years. With the influencer marketing industry estimated to become worth up to $15 billion by 2022, new NIL policy will expand the pool of desired brand ambassadors by thousands, unlocking powerful opportunities for brands. Accomplished and dedicated student athletes who have a genuine affinity for brands or businesses can be great representatives for a company and their stories of determination and triumph can be woven into the messaging about a brand or business in an authentic way that generates attention, engagement and affinity for the sponsoring business or brand. Such partnerships could help brands engage with consumers who are turned off by the high salaries of professional sports, allowing them to reach audiences that appreciate the “rawness” of college sports. Accordingly, the NIL rules could in turn affect brand partnerships with professional sports leagues because brands have more options when it comes to budgets.

The biggest shift in marketing opportunity is that on any level—national, regional, hyper-local or niche sports—brands can execute campaigns leveraging student-athletes in real time. For instance, a brand sponsor’s social channels could feature programming with a student-athlete the night before a marquee game to build excitement and engage fanbases more directly. Brands will also be able to capitalize off cultural moments in the world of college athletics as they happen and establish themselves as relevant mainstays in those conversations. Imagine as a national retailer, having star players posting branded content minutes after their championship wins. Or being the family-owned restaurant that sells a branded menu item moments after the local star quarterback’s winning touchdown.

Why did the NCAA NIL deal policy come into effect?

Collegiate athletes being prohibited from being compensated while in school has long been a divisive and contentious issue. The NCAA finally bowed to public pressure and took a big step forward by announcing the new interim NIL deal policy which allows athletes to be compensated from the use of their names, images and likenesses. However, any such deals would have to come from a third party, as universities will still not be allowed to pay the athletes directly, so that athletes won’t be considered university employees.

The new rules are the NCAA’s temporary solution to what otherwise would have been a significant imbalance on the NIL front due to a wave of state level legislation coming into place. On July 1, laws were taking effect in six states that would have undercut the NCAA’s prior rules by generally enabling college athletes to make money off their NIL. A number of other states were rushing to enact NIL legislation or policies or to expedite the effective date for previously adopted legislation. With no preemptive federal law in sight, the NCAA faced a choice: either adopt its own policy or allow a situation in which athletes in certain states could profit from their NIL while others could not.

With the old policy the NCAA has restricted what athletes can earn outside of their scholarships for years. The National Bureau of Economic Research study states, “Intercollegiate amateur athletics in the U.S. largely bars student-athletes from sharing in any of the profits generated by their participation, which creates substantial economic rents for universities.” The top NCAA Division 1 schools earn approximately $8.5 billion in annual revenue, with 58% percent of that revenue coming directly from men’s football and men’s basketball programs. But less than 7% of the revenue generated by those two sports go to its athletes in the form of scholarships and stipends for living expenses. Under the collective bargaining agreements in place in the NFL and NBA, the professional athletes in those two leagues receive approximately 50% of the revenue generated by their athletic activities in the form of salary.

The reason stated by the sports governing body was to prevent student athletes from undermining the foundation of college athleticism, one that supposedly prioritizes education, as well as preventing students from damaging the concept of “amateurism”, in which amateur athletes should remain free from monetary influence. Also, only men’s basketball and American Football actually make money. The NCAA takes all the money they make from those two sports and distributes it to the rest of the athletic department so that, for example, athletes from women’s lacrosse and men’s track and field can get scholarships when they otherwise wouldn’t because there isn’t a large fan base there.

How does the new NCAA deal impact college athletes with the NIL compensation?

Businesses have long been able to take advantage of high profile student athletes, even making up to hundreds of millions, from athletes’ hard work without a single penny being compensated to the students themselves. According to the NCAA, 480,000 compete as NCAA athletes, but only 2 percent of collegiate athletes go on to play professionally or on Olympic level meaning that 98% leave the sports world unpaid. This has all changed overnight with athletes entering the NIL era, who all now stand the same chance to earn their share depending on their drive, initiative, and social reach.

However, not only athletes from popular sports like basketball, soccer or baseball are placed in the spotlight. Women and less popular niche sports are also benefiting from the new state law. With women’s sport currently still suffering a lack of broadcasting time (the average episode of SportsCenter only allocates 2 percent of its coverage to women’s sports), athletes’ worth is now determined by factors like social media followers and audience engagement as opposed to screen time. With women having the highest social media reach overall, this will not only give them an opportunity to finally make a living from their achievements, but also empower female athletes to push for more equality within the sporting landscape.

Examples on how NCAA athletes may market their NIL under the new rule introduced, US sporting students are now eligible for payment using:

On top of that, athletes are also allowed to work with professional firms and agencies that coordinate these kinds of sponsorship deals.

Setting up an account on our Sponsoo platform also increases your visibility and chance to find a suitable sponsor.

This new NCAA law has already come into effect in states such as Alabama, Florida, Georgia, Mississippi, New Mexico and Texas. However, without a federal law, the new policy allows students to engage in NIL activities  for college athletes who don’t live in a state with NIL law, as long as they are “consistent with the law of the state where the school is located”. This includes setting policies around matters like whether students may wear a university’s logo in an advertisement.

Some states with the existing law may also have varying policies. In Texas for instance, NCAA college athletes are not allowed to accept sponsorships brands associated with alcohol, tobacco products, e-cigarettes, anabolic steroids, sports betting or adult entertainment products. This is the same in Illinois, who stated, products or services that are “considered to be inconsistent with the values or mission of a postsecondary educational institution.” are prohibited from endorsements.

Auburn quarterback Bo Nix posted to Instagram his first endorsement, for an Alabama-based company that makes iced tea and other beverages. Miami quarterback D’Eriq King was announcing that his online store was open for business at deriqking.shop. Iowa men’s basketball player Jordan Bohannon also opened up a merchandise store as did Kentucky’s Dontaie Allen.

Unilever’s Degree became one of the first brands to test out the NCAA’s interim NIL policy. Degree is committing more than $5 million over the next five years to its “Breaking Limits” program, an initiative that will see the brand partner with a team of college athletes, per a press release. As with some of its other marketing efforts, Unilever was quick to highlight its purpose-led approach, which will highlight the experiences of a diverse group of athletes from a range of sports, providing equal compensation to men’s and women’s athletes, in aggregate. The issue of how students of different genders and different sports will be compensated has been an issue in college athletes’ fight for NIL rights, a point Unilever is seeking to acknowledge.

A small restaurant chain that’s headquartered in Nebraska, Runza, announced that it would offer NIL deals to the first 100 college athletes in the state who promoted the chain’s rewards app on social media. University of Nebraska tight end Austin Allen took Runza up on its offer, promoting the app and including a photo of himself in front of one of the chain’s locations.