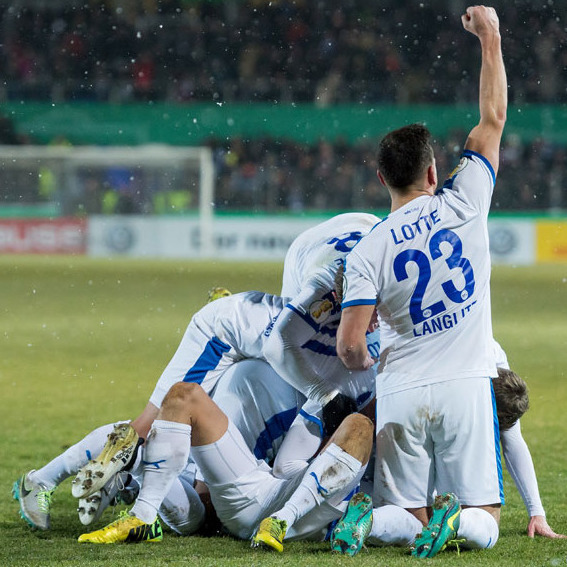 Fans of the German juggernaut FC Bayern München in 2017 still flinch when they hear the phrases “Weinheim 1990” and “Vestenbergsgreuth 1994”.  On both nights in August, the dreams of another big cup run for the bavarian team were shattered abruptly. In 1990, Bayern travelled to their bush-league opponent FV Weinheim and lost the game 0:1 after an astonishing game. Only four years later, the star-studded team had to travel to Vestenbergsgreuth, a little village that’s called “home” by just 360 people. Nevertheless, the result was just the same. The great FC Bayern lost the game and had to drive back to Munich without the necessity to mark the second cup round dates in their calendar.

In 2017, plenty of years after those cup games, a small club out of the Steinfurt district, is making a name for itself after starting an inspiring winning-streak: The Sportfreunde Lotte.  The small community Lotte has a population of just 14.000 people. And every single one of them is eagerly awaiting the 28th of February. The Sportfreunde have a date with the German powerhouse Borussia Dortmund next tuesday. But not just for a simple mid-season test as one might think. Both teams are getting ready for their quarterfinal in the DFB-Pokal, the German domestic cup. The team of head coach Ismail Atalan can achieve something spectacular.  Let’s take a trip down memory lane:
The star of the Sportfreunde Lotte started to rise in the spring of 2016, when they won their division in Germany’s fourth league and got promoted to the third league. Back then, this was the biggest success in club history! After a summer of intense preparation and nine new signings, Lotte was drawn first division team SV Werder Bremen in the first round of the DFB-Pokal.

Werder Bremen had not shown their best abilites, loosing to lowerclassed-teams 3 times in the last 5 years. The games was tied after a terrific first half and Lotte rose to the occasion. Andre Dej gave them the lead in the first minutes of half number two and the whole stadium erupted. Bremen could not do anything to contain the underdog and was only able to cure their aggression with fouls: Fin Bartels got sent-off after a second yellow card in the 81th.

The Sportfreunde, which translates as “sports friends” drew another huge opponent in their second round match: Bayer 04 Leverkusen. And once again the German football community predicted a lopsided game and an easy Leverkusen win. But what actually happened was another thriller of a match. The team of coach Roger Schmidt had the lead twice and even held a one-man advantage for the whole 30 minutes of extra time. But after Kevin Freiberger scored the 2:2 equalizer for Lotte, the penalty shootout had to bring a conclusion. Leverkusen could not finish the job and Lotte advanced to the round of the last 16 and the whole town backed them up, Literally, because the team needed big help a couple of weeks later:

Because of a huge snowstorm during the night before their match against 1860 Munich, it was uncertain if the game could even start. But more than 100 people showed up, shoveled tons of snow and the game started right on time. The game was quite uninteresting for Lotte standards. It was an easy 2:0 win and is now the only remaining amateur team in the cup competition.

What’s next? Will the cinderella story continue? Can the Sportfreunde Lotte beat Borussia Dortmund? We are crossing our fingers and are hoping for the next sensation. The story is just too amazing to not be continued.

Benefit from this amazing story of the unique Team and use the quarterfinal against Dortmund as a platform for your marketing activities! Contact us at mail@sponsoo.de. The team of Europes largest marketplace for sports-sponsorship is happy to help!

Between non-league football and the big money: historical and traditional football clubs in England and their fan-bases.