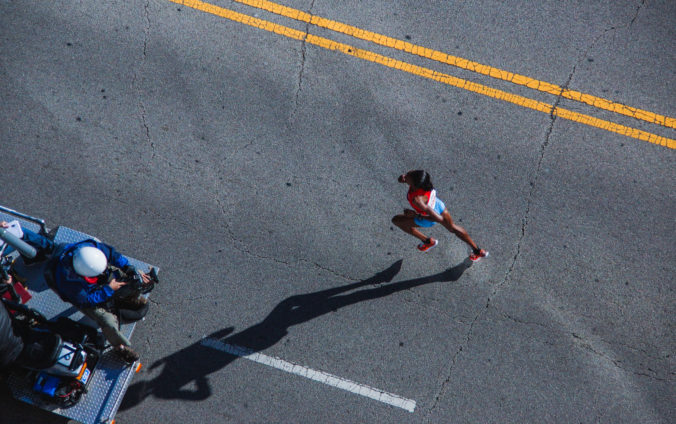 The start of a new marathon season!

Finally! It’s  running season again! The days are getting longer, the temperatures are rising and so is the motivation to lace up the running shoes! Here in Hamburg, lots of people are jogging around the Alster and the city-park is frequented by joggers more and more. The manufacturers of sports equipment are getting ready for the upcoming season as well, because a lot of money can be made at the big events. According to the German newspaper Wirtschaftswoche, the revenue of shoe sales were 300 million in Germany alone!
Reason enough for us to gather some interesting stories about the big events, so that you are not going into the new season unprepared!

Once again this year, more than 25.000 runners will gather together this weekend to run 42,195 kilometer in typical northern weather.  The largest spring-marathon in Germany has a  record of 2:05:30. That makes him one of the fastest around. The race-weekend starts with a big fair on friday, where the athletes can take a peek at the latest equipment-trends. One of Sponsoo’s employees will run the marathon as well, after a long preparation and numerous healthy lunch meals: Loud support and painted signs in the sponsoo colors are mandatory! ;)

The race in Berlin is said to be the world’s fastest. New records are set up almost every year. In the last ten years, the record was improved five (!) times. Always in Berlin. The current world record holder is Kenian runner Dennis Kimetto, who crossed the finish line behind the Brandenburg Gate after just 2:02:57. He was the very first person to achieve the feat of running a marathon in under 02:03:00. Long distance legend Kenenisa Bekele tried his best to be even faster last year, but he missed the mark by just seven seconds. One can be very excited if the citizens of Berlin will (finally) witness another record to be broken this year.

Just leave it to the Americans to organize the largest sporting-events in the world. After holding the Super Bowl in February, the USA are also hosting the biggest mass sports event of the year: The legendary New York Marathon. 50.896 athletes participated in the athletic sightseeing-tour in 2016. After starting the race on Staten Island, the course runs through Brooklyn and Queens, takes a turn to the Bronx and ends up in the famous Central Park, where the finish line is located. Besides the high entry-fee of 400 dollars, a lot of the participants have to pay for travel and accommodation while they connect the marathon with a short vacation right after.

Marketing at the Marathon: DO!

On the first weekend of May, Eliud Kipchoge from Kenya, Lelisa Desisa from Ethiopia and Zersenay Tadese from Eritrea want to achieve the impossible: A marathon in under 2 hours. For that to happen, the runners have to shave of 5 seconds of every kilometer. A team of scientific experts and former athletes, who supervise the nutrition, workouts and surroundings of the athletes want to stem this ambitious project. Initiator of said project is manufacturing-giant Nike , who is attracting all the attention from their respected target group: Runners. For the first time ever, carbon-fibers were built right into the spikes, to make the runners faster than they have ever been. If they will indeed run a sub 2-hour race, the shoes will sell out like hot cake!
And even if Kipchoge, Desisa and Tadese won’t break the 2 hour-barrier: Nike would have executed an awesome content-marketing campaign which will further sharpen their already exciting brand image.

Marketing at the Marathon: DON’T!

Competitor Adidas did not cover itself with glory after their horrendous e-Mail to participants of the Boston Marathon this week.  The mail said:

“Congratulations on surviving the Boston Marathon. You are Boston Strong! – What’s Next?”

The usage of the word “survive” is a very unlucky one in the context of the attacks on the race four years ago. Adidas issued an official excuse just hours after, but the damage to the image had been done. Especially gamy is the fact, that Adidas wanted to promote their new clothing line with described E-Mail. Without a doubt: This action can be put into the category of “Marketing-Dont’s” right away.

If you want to perform some “Marketing-Do’s” with us, why don’t you send us a message? Sponsoo is Europe’s largest marketplace for sport-sponsoring. Please contact us via support@sponsoo.de, or click through our database. We would be more than happy to assist you with choosing the right fit for your company. Our database with more than 5.000 athletes and clubs provide a wide variety of opportunitie