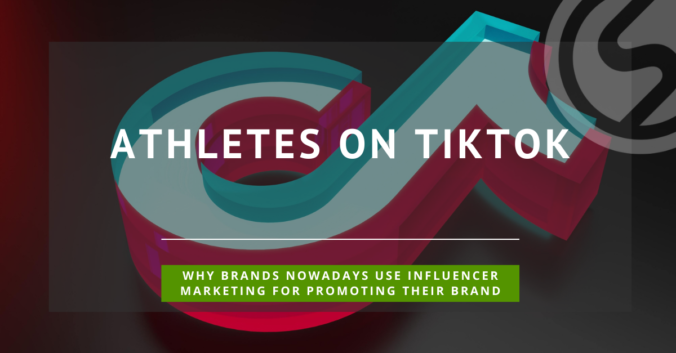 Are you following your favourite athlete on Social Media yet?

Most of today’s big athletes are quite active on Social Media. They nowadays share their lives as athletes on Social Media. But other than that, they often share more private things including family and friends as well as their love for their other hobbies in their freetime.

Athletes on TikTok provide an attractive opportunity for brands to team up with them because of the high chances to go viral on TikTok and target a large range there – contrary to other Social Media platforms. (RecurPost). Regarding Viral Marketing and thanks to the category sports belonging to the most popular topics on TikTok, TikTok is a great opportunity for advertising. (OMD). So it’s very likely for brands to use TikTok in terms of Influencer Marketing because influencers have a great value for their many followers – particularly for GenZ. (Statista).

Regarding their numbers of followers on TikTok, the ranking would look like the following:

Amir Khan comes 10ᵗʰ place of the ranking with his 1.1M+ Followers on TikTok.

Khan is a British professional boxer of Pakistani origin who was born in 1986. (Source: BoxStat Website).

He is very active on TikTok where he mostly shares his workouts with his community along with TikToks who show him boxing. His TikToks often include his daughters, him and his wife or him and his friends. With his TikToks he is showing how you can help people in need and he also encourages his Follower to do the same.

David Beckham with the 9ᵗʰ place in the ranking has 1.5M+ Followers on TikTok.

Beckham was born in 1975 and is an English former professional football player. (Source: David Beckham Website).

Despite the fact that he isn’t that active on TikTok with his only three shared TikToks, he has more than 1.5M Followers. In his TikToks he calls attention to important topics in the world. For that, he teamed up with TikTok and UNICEF in the past. Other than that, he once again teamed up with UNICEF to help people who are affected by the Ukrainian conflict.

Rodrygo Goes makes it to 8ᵗʰ place of the ranking with more than 1.6M Followers on TikTok.

Goes was born in 2001. He is a Brazilian professional football player for Real Madrid and for the Brazil national team. (Source: Soccerway Website).

His TikToks often show himself playing football, working out or playing billiards. Other than that, he includes his friends and teammates in his TikToks as well as his family.

Stephen Curry makes it to the 7ᵗʰ place of this ranking with his 2.5M+ Followers on TikTok.

Curry was born in 1988 and is an American professional basketball player for the Golden State Warriors of the NBA. (Source: NBA Website).

His TikToks show content from his life as a basketball player. He also shows himself playing  golf in his free time.

Mason Mount at 6ᵗʰ place of the ranking has 2.9M+ Followers on TikTok.

Mount was born in 1999 and is an English professional football player for Chelsea and for the England national team. (Source: Soccerway Website).

On TikTok, he shares content like him playing football and himself fooling around with his teammates and friends. His Followers also get some private insights, for example from times when he was younger. Under the Hashtag MasonMountMarch, he shared some TikTok “duets” with content from his Fans and Followers.

Giannis Antetokounmpo comes 5ᵗʰ place of the ranking and has 3.3M+ Followers on TikTok.

Antetokounmpo is a Greek professional basketball player for the Milwaukee Bucks of the NBA who was born in 1994. (Source: NBA Website).

He actively shares TikToks in which he is playing basketball. With his TikToks he shows his funny side alongside his friends and teammates. He also shares TikToks of him, his girlfriend, his son and his dog.

JuJu Smith-Schuster with the 4ᵗʰ place of the ranking has 3.4M+ Followers on TikTok.

Smith-Schuster was born 1996 is an American professional American football player for the Kansas City Chiefs of the NFL. (Source: NFL Website).
He is very active on TikTok where he likes showing his funny side. His TikToks show him dancing, playing American football or fortnite. He also includes his sister or his dog as well as his friends and teammates in his TikToks.

Tom Brady secures the 3ʳᵈ place of our ranking with his 4M+ Followers on TikTok.

Brady is an American professional American football player for the Tampa Bay Buccaneers of the NFL who was born in 1977. (Source: NFL Website).

He shares TikToks in which he is playing American football. After a win with his team, he normally shares a video message regarding that win and shares insights regarding his life as a professional athlete. He likes following some TikTok trends and shares some of his own.

Sergio Ramos comes 2ⁿᵈ place of the ranking with 9.8M+ Followers on TikTok.

Ramos was born in 1986. He is a Spanish professional football player for Paris Saint-Germain and for the Spain national team. (Source: Soccerway Website).

Ramos is very active on TikTok. His TikToks mostly consist of content like football and workouts. Other than that, he shows his funny side while dancing for example. He also includes his family, friends and teammates in his TikToks.

Marcelo Vieira gets the 1ˢᵗ place of our ranking of Top 10 Athlete Influencers on TikTok with his 11.3M+ Followers on TikTok.

Vieira is a Brazilian professional football player for Real Madrid. He was born in 1988. (Source: Soccerway Website).

On TikTok, he shares content about football and his workouts. In his TikToks, he often includes his family, friends and teammates in which they are messing around, dancing or playing football.

Social Media is a great and innovative way to build your own community. With their huge audience on Social Media, athletes nowadays profit from advertising deals – particularly sport sponsorship deals – which they e.g. get from popular brands. It’s more likely to attract brands and sponsors if you have a huge range and an active community. (→ Read more about Personal Branding here).

We asked our colleagues about their favourite athletes. Our Top 3 Athlete Influencers on TikTok are the following:

Gizek was born in 1991. He is a German professional MMA Fighter. (Source: Sherdog Website).

«I’m interested in professional fighting techniques and I found an MMA Fighter’s profile on TikTok. His name is Kerim Gizek. On TikTok, he shares his workouts and his fighting techniques. And of course he has a Sponsoo profile.» – Lukas, Sales Associate at Sponsoo

Sainz who was born in 1994 is a Spanish current Formula 1 Driver for Scuderia Ferrari. (Source: Carlos Sainz Website).
«One of my favourite athletes on TikTok is Formula 1 Driver Carlos Sainz. He shows his followers how he works out and of course there is a lot of content from the race track.» – Maikel, Marketing Associate at Sponsoo

Williams was born in 1981. She is an American professional tennis player. (Source: Serena Williams Website).

«I enjoy following professional tennis player Serena Williams on TikTok where she is  very active. She shares content like sports – especially tennis – and fashion. She also follows trends on TikTok and makes her own TikToks regarding those trends. She includes her family in her TikToks so that we get private insights into her life.» – Celina, Sales Associate at Sponsoo

Are you able to find your favourite athlete in the rankings above? If not, we definitely think it’s worth having a look at the different TikTok profiles and the entertaining contents.

And now, it’s your turn to make it into the Top 10 of our ranking and to get your own sport sponsorship deal done! ;-)

What the New NIL Movement Brings for Future Sponsorship Possibilities