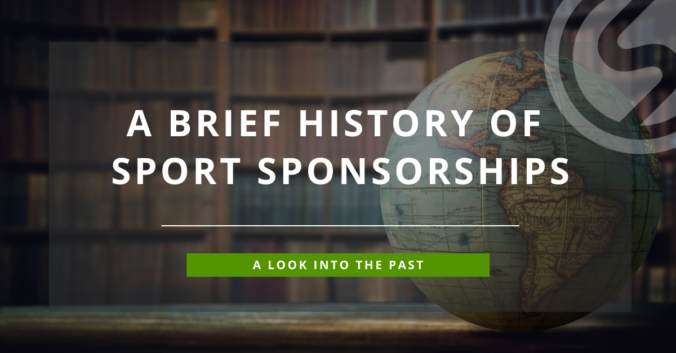 A brief history of sport sponsorships

Sponsorships are an important part of the sports world. The cooperation between companies and athletes or teams is a win-win strategy from which both sides can benefit. While sponsorship donations as a promotional strategy increase brand prestige and bring long-term economic benefits, athletes can derive material and financial benefits from their sporting activities and pursue their passion for sports on a professional level. This collaboration between athletes and companies sounds natural to us today. But that wasn’t always the case. A look into the past shows us that this relationship only established with the development of sport as a popular social activity and the spread of television in everyday life.

The origins of sport sponsorship

Although many sports developed in the 19th century, it took a long time for them to gain mainstream acceptance in society. The first steps were taken in 1896 with the revival of the Olympic Games in Athens. The film manufacturer Kodak discovered the potential of sport for improving the company’s image and financially supported the sporting highlight. Four years later, several Swedish companies became sponsors of the Olympic event in Stockholm. Well-known brands slowly began to incorporate major sporting events, which enjoyed increasing popularity and attracted more and more viewers, into their advertising strategy.

The media boom followed in the second half of the 20th century. Radio and television broadcasted important sporting events and further associated advertising with sport. In Germany, it mainly affected the rising football industry in the form of perimeter and jersey advertising. The Wormatia Worms football team started the first attempt in 1967 with the lettering “CAT” for the construction machinery manufacturer “Caterpillar” to overcome a financial bottleneck. The negative reaction of the German Football Association led to the termination of the cooperation. The final breakthrough came in 1972. The liqueur brand Jägermeister sponsored Eintracht Braunschweig with the nowadays modest sum of 160,000 DM. Other teams soon followed the Lower Saxony football club, which led to shirt advertising in the Bundesliga being officially approved. Other sports also began to benefit from this boom.

On the international level, the United States has made a name for itself in terms of advertising and sports. Stars like football player Frank Gifford or baseball pro Bob Uecker made sensational deals with well-known brands. In addition, viewers were introduced to the American sports television network ESPN in 1979, which soon developed into a lucrative space for advertising placements. The earnings from the Montreal Olympics showed just how far the sports business has come in just a few short years. 628 companies sponsored around seven million dollars for the sports highlight of 1976. In addition, top athletes began to sign sponsorship contracts that are taken for granted today, which meant that they were increasingly able to act independently instead of being strictly tied to their national teams.

Today, commercialization in sport has reached unbelievable proportions. Entire events and television programs have been sponsored by big names in business since the 1990s. Stadiums supported by name sponsorship are springing up around the world. In this area, the Volksparkstadion in Hamburg is a pioneer in Germany. It changed sponsors three times between 2001 and 2015. The spectrum of sponsors ranges from sports betting providers such as Betway, which is now making a name for itself as an online sports betting site, to the giants of the automotive industry such as BMW or Opel.

The integration of the digital world is relatively new in the business. A message on Twitter or an image on Instagram reaches numerous potential customers within a very short time. Sponsored sports teams or athletes who have millions of followers are often used as successful advertising faces and brand ambassadors. Furthermore, they no longer shy away from promoting the slowly emerging eSports as well as amateur sports. Overall, many brands these days are adopting more aggressive advertising strategies and draw the attention of their viewers through creativity. For example, Nike sponsored an eighty-year-old runner in the Berlin Marathon and received more attention than the official sponsor Adidas. The so-called ambush marketing put Nike in the foreground of the big event.

The examples show that after the wave of commercialization in sports, sponsorships have now become a natural part of the sports world. Over the years, the mutual interdependence has become a profitable proposition for both brands and athletes.

News from the RIP deal scammers