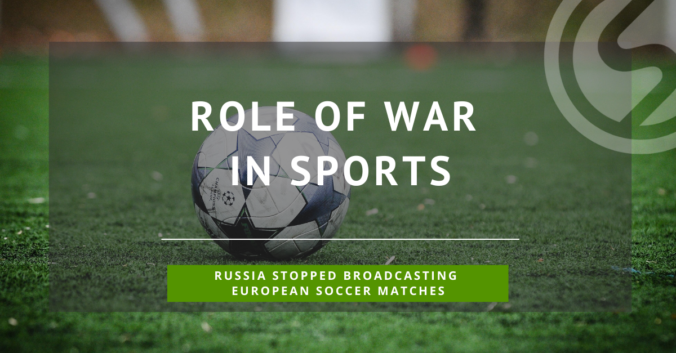 How Sports Can Unite and Be “Banned” from Russian TV

Sports events are an important part of sponsorship placements.

If you think of soccer, everybody has a picture in mind of a huge soccer stadium with the advertisement banners at the side of the soccer field.

But what if these banners showed political statements?

In recent European soccer matches, pitch-side ads showed “Stop War” messages regarding the Ukraine conflict which is currently going on.

In Russian television, the reaction of Match TV to this was cutting two Bundesliga matches during the regular playing times on April 2 and 3. Before ending the broadcast of the two matches in the ninth minute, the camera perspective was changed to a perspective where only the crowd was shown instead of the pitch-side ads.

Evidence by several users on Twitter proving these incidents have already been taken down since these pictures and videos include copyright footage of Match TV.

During Dortmund vs. Leipzig, the Match commentators even told the audience that they «have to interrupt the broadcast due to reasons out of their control and due to political reasons».

The removal of that game was then also confirmed by a reporter for Serbian Telegraf.

During the Europa League match West Ham United vs. Sevilla on March 17, the fans waved their Ukrainian flags and presented their anti-war messages after Ukrainian player Andriy Yarmolenko entered the pitch at the stadium. Match TV then reacted by ending the broadcast. Another broadcast of the match between Sweden and Czech Republic on March 24 also stopped airing.

The reaction of leagues in times of the Ukrainian conflict

To help the people of Ukraine, the English top flight made a donation of £1 million to the Disasters Emergency Committee (DEC).

The English Football League and the Football Association stopped their broadcast agreements in Russia, whereas the UEFA and the Bundesliga are still keeping their contracts with Match TV regarding broadcast rights in Russia.

(Source of this blog article: Insider).

When the simulation becomes reality