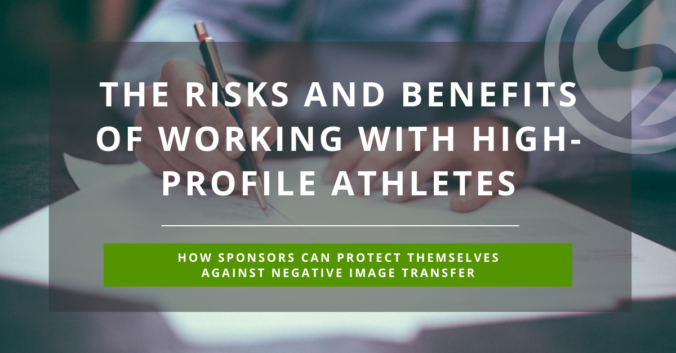 The risks and benefits of working with high-profile athletes

The number one goal of a relationship between sponsors and athletes: a positive image transfer. If the image of one of the parties is damaged, it can lead to an end of the cooperation – the potential damage can be deemed too great. A recent example: Novak Djokovic and the Australian Open.

What happened? Novac Djokovic, who is not vaccinated, entered Australia under a presumed exemption following a Covid infection in December. The Australian Border Force officers rejected his exemption after he arrived in Melbourne, since all new arrivals must be fully vaccinated. A few court dates later the tennis player agreed to leave the country.

As the story went through the news some of Djokovic’s sponsors, such as fashion brand Lacoste, have indicated they are thinking about an early end of their sponsorship deal with the tennis player.

The Watchmaker Hublot, another one of Djokovic’s sponsors, took the opposite position and released a statement supporting the athletes decision.

“The principle of vaccines is that it’s something private. We value personal freedom. Everyone can decide. One can be in favor or against. That’s our position.”

The entire situation poses a dilemma for sponsors, who have to find a midway between respecting the athletes personal beliefs and keeping up their image in the public eye.

Why do sponsors take the risk of working with a high-profile athlete?

The benefits are simple: increased brand awareness, a defined brand image and ultimately an increase in (product) sales. However, any relationship has a certain level of risk and even the most talented people have a personal life full of peaks and valleys. When does it make sense to take the risk?

One example of a brand that likes to take “calculated” risks is Nike. Their brand’s enormous strength and credibility puts them in a unique position and enables them to work with polarizing and controversial athletes that are not afraid to make headlines.

Tiger Woods is one example of Nike taking a leap of faith with one of their brand ambassadors. The professional golf player remained with the brand, even during his darkest moments. Neither his arrest for impaired driving, nor this bad performance on the golf course due to his back injuries could drive Nike away. While many other sponsors fled the scene, they decided to stick with Woods and take the risk – and they were rewarded for their loyalty. After Woods succeeded at the Masters, experts estimated that the value of his partnership with Nike increased by $22 million.

Despite Nike sticking with Tiger Woods, they also now when to be distance themselves from an athlete. Following accusations of abuse made against Manchester United player Mason Greenwood by his girlfriend, the football player’s shoe sponsor issued a statement saying they were “deeply concerned” by the allegations and will be montoring the situation.

When does it make sense to pull out of a sponsorship deal?

Similar to the accusations made against Greenwood, the case of Oscar Pistorius was a little bit different compared to the success story of Tiger Woods and Nike. Shortly after being accused of murdering his girlfriend back in 2013, experts already deemed him “damaged goods” and advise brands to “act quickly and distance themselves” from the Paralympic athlete. Nigel Currie, director of a sports marketing agency, agreed: “This is very different to the Tiger Woods [case]; this is life and death. There’s no coming back from this.” Shortly after his arrest, all of Pistorius sponsors had pulled out of their deals with the athlete.

Besides criminal offenses like driving under the influece or murder, doping is the main reason for a termination of contract in the sports business. One example: Sponsors pulling out of their contracts after rising doping allegations against the IAAF (International Association of Athletics Federations) in 2016. One of them was Nestle, who released a statement following the termination of contract.

“This decision was taken in light of negative publicity associated with allegations of corruption and doping in sport made against the IAAF. We believe this could negatively impact our reputation and image and will therefore terminate our existing agreement with the IAAF”

The question remains: Whether and how can a sponsor terminate a sponsorship contract in the case of misconduct by an athlete? What modifications can be added to a contract in order to secure a brand’s image and reputation?

What can sponsors do to protect themselves and their brand?

All these horror stories can make it seem like the benefits of a high-profile brand ambassador cannot outweigh the risks.

Similar to the practice in other industries, sponsorship contracts can include an exit phrase. Sometimes this can also be included in the beginning of the contract, stating that both parties agree to “mutual goodwill” – but this is not only meant as an introduction sentence. In the event of misconduct by the athlete (or generally the sponsored party) or due to a loss of positive image, the sponsor has the option to entirely or partially dissolve the contract. If the athlete refuses to accept the termination, the breach on context needs to be explained – like Nestle referring to a possible negative impact on their brand and reputation due to the athletes behavior, which is not the desired outcome of the sponsorship deal.

Of course this protects the sponsors just as much as the athletes – because although this article focuses on the sponsors point of view, athletes can also have reason to end their sponsorship contract.

The Top 5 Sport Sponsorship Trends in 2022