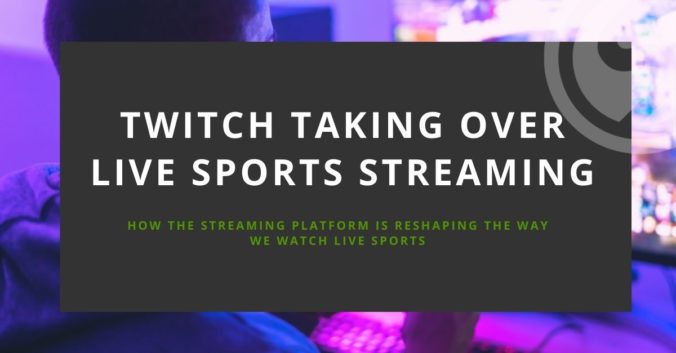 Initially founded by Justin Kan, twitch was created as a streaming platform, who made its name on streaming esports and video gaming. Having gained 3.2 million users per month in the first year of launch alone, twitch has since spread into many different areas, such as music, travel, food, as well as live sports streaming, which is now pushing its way to one of the top streaming categories.

As youtube and facebook streaming slowly started to stumble in the past 12 months, twitch has continued to grow in the first quarter of 2021, generating nearly 6.9 billion hours watched in total, making it an increase of 97% from previous year. (Source: Stream Hatchet).

With the pandemic being a huge driving force for their immense growth, it wasn’t the only reason for their expansion. Twitch launched a rebranding strategy in 2019, with an effort to demonstrate their capabilities, helping brands utilize their technology to reach out to the large esports audience, with one goal in mind – proliferating into areas beyond gaming. The sports industry being one of them.

Only last year, has Amazon’s owned streaming platform partnered up with four major football clubs like Real Madrid, Arsenal, Juventus and Paris Saint-Germain, playing exclusively produced content alongside the launch of a own sports category. But even before that,major sports stars from F1 Racing, NBAl, MMA and wrestling used twitch to broadcast live games, attracting a huge audience especially during the pandemic.

And it doesn’t stop thereTwitch continues to storm the sports industry with their announced partnership with NBC for exclusive content from Tokio 2021 Olympics, broadcasting highlights, athlete interviews.

As Twitch continues to grow its hub of co-streaming rights and partnerships with sports leagues, it is certainly going to take on an important role within the sports industry.

One of the unique ways in which Twitch seems compelling towards their viewers, is by offering them a sense of belonging within a community. Using interactive features, such as live chats, polls and Q&A’s, fans are having a new experience around live sports and are empowering them to get involved. In NFL 2018 for instance, Twitch used a new gamification feature, where they let fans make quarterly predictions and project stats during the live stream about the number of touchdowns, total possessions time ect. After each quarter, the user with the nearest prediction is rewarded with points and ranked against other members in Twitch. The users are not only feeling like they are a part of the game, but also having a complete new viewer experience through fan engagement.

How does it impact the sports marketing industry?

Twitch’s rapid expansion into the sports field is unquestionably becoming a huge potential for right holders and marketers. One of the factors making Twitch so attractive from a sports perspective, is its large young audience that is hard to reach via other media with its core demographic consisting of 73%, aged under 34. (GlobalWebIndex).

And the viewership continues to grow, having over 2 billion hours of twitch content viewed in April 2021 (TwitchTracker).

As the numbers are growing and more sports teams and athletes decide to utilize twitch as their platform to stream their content, it is no doubt turning into a place for marketers to keep an eye on and perhaps implement within their strategy.