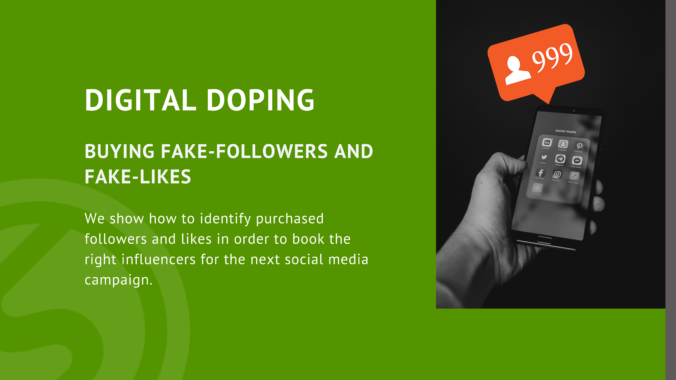 In social media, the number of followers and likes is a measure of success and a decision criterion for companies that want to enter into cooperation agreements with influencers.

In recent years there has been a lot of negative press about brands, celebrities, influencers and even politicians who wanted to polish up their social media accounts by buying followers and/or likes. Nowadays, so-called fake followers can be bought with just a few clicks. If you start a search query on Google, you will immediately find numerous websites with such offers:

Why do so many users buy fake followers?

At first glance it does not seem to make much sense to invest time and effort in creating good content and then artificially buy followers, likes and comments instead of relying on organic feedback from real followers.

Nevertheless, for many marketers who book influencers for social media campaigns, the number of followers is the most important factor in their decision. Only then other metrics such as engagement rate and target group match are considered.

Under these circumstances it is not surprising that the demand for purchased followers is correspondingly high. The reason why the purchase of fake followers and likes is so widespread is that many influencers feel the pressure to only be attractive for cooperations with companies with a high number of followers.

How can you as a company check whether followers and/or likes have been purchased?

As influencer marketing becomes more popular, the selection of influencers becomes even more important for the success of a campaign. The most important requirement for a successful campaign on social media is to use real influencers to spread the brand message.

It is important to realize that bought followers of certain influencers will never be of benefit to companies. Even if these followers are not bots but real people, they have no interest in the content of the account and follow it only because they were paid for it. The goal of cooperation would therefore be completely missed.

Due to the infinite possibilities to make fake followers and fake engagement look as real as possible, the question now arises which criteria can be applied to find the influencer that meets one’s own expectations.

1. Growth of followers
Authentic influencers usually record a relatively steady growth in their numbers of followers. The growth rate may increase once they are recognized as influencers, but they will not have a massive surge of followers in a short period of time, like accounts that buy fake followers.

If it is possible on the appropriate platform, a look at the growth of followers should be the first step. Various tools prove to be very useful for this. Platforms such as InfluencerDB or Social Blade can provide information about the growth rate or the activity of the followers of an account. For detailed data these profiles are subject to a fee. If you don’t want to spend money, you can also take a look at the following tips.

2. Review of the Engagement rate

One problem with buying followers is that there is one very unbalanced account, i.e. one account has thousands of followers, but very little commitment.

An authentic influencer will have a engagement (likes and dislikes) of about 2 to 3 percent of his followers. So if an influencer has, for example, 100,000,000 followers, an average of 20,000 to 30,000 likes and comments should be seen per post. It should be noted that the more well-known the person or brand becomes, the lower the interaction rate is by nature. Micro-influencers, for example, often still achieve an engagement rate of 8 to 10 percent. If the engagement rate is regularly below these reference values, one should be suspicious.

However, one should also be careful in the other direction, because more is not necessarily better. An average engagement rate of more than 10 to 15 percent is also unusual. The influencer in question could buy likes and comments or use other artificial engagement techniques.

Some of the smarter bot accounts create comments to make them look real. However, these comments are generic and have no substance, such as “great post” or “keep it up”. Because these comments are technically generated, they have no value to a brand that hopes an influencer can convince its followers that the brand’s product is suitable for them.

Fake accounts are often characterized by “unusual” numbers: For example, they link or follow thousands of people, but have very few followers themselves and very few posts in their account. This does not necessarily mean that they are a bot, but it does indicate that these followers will be of little value.

Also, fake accounts often do not have realistic-sounding biographies. Often the bio section is empty or it is only minimally filled in. Another indication is the lack of a profile picture, especially in a visual medium like Instagram.

There are also online tools such as Social Audit Pro to identify fake followers in your profile. However, this is subject to a fee and the check of 5000 followers costs $5.

What consequences does it have for the “buyers” of fake comments, fake likes, fake followers or fake story views?

With such a purchase you get exactly what you pay for: a number. Bought followers will never tag one of the posts with “Like” or leave comments. Even if the large number of followers are real fans, anyone who takes a closer look at the list of followers can quickly identify fake and inactive accounts. The same applies to purchased likes, comments or story views. Again, you won’t get any real interaction, these likes and story views are a pure number and the purchased comments are generic.

With such abbreviations you endanger the integrity of yourself or your brand. If real followers and fans find out about these actions, you can no longer expect them to trust the influencer or brand.

What are the social networks doing to limit the fraud with fake followers and likes?

The topic of fake followers and likes is nothing new for social networks – the problem has existed for several years. In the meantime, the algorithms have been improved, which has decimated many of the fake elements. People who appear to be abusing and spamming the platform are often blocked and even deleted. Consequences can be seen especially in the case of obvious fake accounts, because millions of them are removed.

Nevertheless, social networks cannot eliminate all fake accounts. Determined fraudsters will trick the security mechanisms that are introduced. So it is up to the brands to identify fake accounts and only work with real influencers.

At Sponsoo, we understand the challenges companies face in the digital age. Besides connecting sponsors and athletes and clubs, the sustainable and long-term integration of influencer marketing for brands is one of our core competencies.

We can convince with quality, individuality and brand fit when choosing the appropriate influencers. Our social media campaigns are based on sound strategies that are tailored to the respective company and its goals.

What the coronavirus crisis means for sports clubs