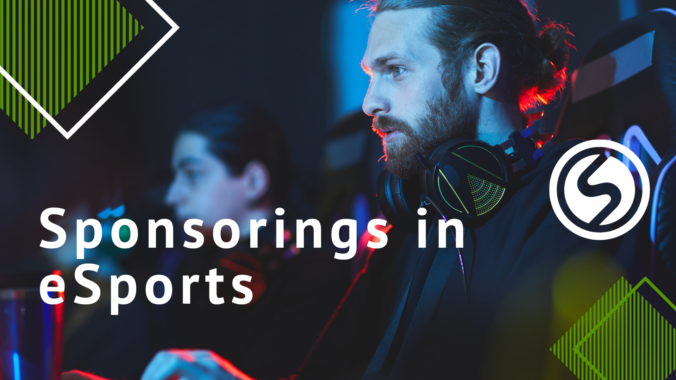 You can see the concentration and tension in the faces of the players as they look excitedly at the monitors. In the stands, numerous fans cheer when their team has performed well. ESport is the competitive playing of video games.

Digitalisation means that sports are no longer played only in stadiums or on sports fields – eSports tournaments have filled entire arenas for years.
According to the business magazine Forbes, international eSports giants such as Team Liquid or Cloud9 are already worth 300 million US dollars and thus on a par with some Bundesliga clubs.

The industry is booming – which is why sponsorship commitments in the eSports industry are becoming increasingly attractive for companies. Numerous companies are already relying on it:

Advantages of sponsoring in eSports

ESports is also particularly popular among the Millenials or Digital Natives, a target group that is often difficult for brands and media to reach – young, educated and mostly male with significant purchasing power.
Established companies in particular must ensure that they remain relevant in the new digital age. Here, in addition to product innovations, the focus is on addressing target groups. The target group between 16 and 36 years is often no longer accessible via the classic advertising channels, as they rather expect personalized interactions on the communication channels that are important for them, such as Facebook, Instagram or TikTok. The use of eSports opens up an innovative way to reach this group digitally.

Another advantage of eSports is that nothing connects people around the world faster and easier than the Internet. An international eSports tournament is sometimes broadcast worldwide in 20 languages – either live or through subsequent coverage. In the USA, the Netherlands, Sweden, Great Britain and South Korea, eSports is now even a recognized sport.
The Asian Olympic Committee has now taken the next step and included eSport in the programme for the Asian Games. So 2022 will be the first time that teams will “play” for Olympic medals .

European and American companies that see potential sales markets in Asia can use an eSports commitment for their advertising purposes and benefit from the particularly high eSports affinity in Asian countries.

Thanks to the young target group, which has a strong international network, new markets are opened up. As sponsors, companies show that they think in a future-oriented way and are interested in new business areas, without neglecting the promotion of idealistic values of sport – competition, openness, fairness and performance.

Furthermore, the entry barriers and the associated costs are still low compared to other sponsorships, such as sponsoring the jerseys of an eSports team, and thus offer an attractive opportunity to activate many consumers with a manageable marketing budget and to achieve a high return on investment.

Due to the corona virus, almost all sporting events of the last few weeks have been cancelled, including the Olympic Games in Tokyo, the German Bundesliga, Formula 1 and the European Football Championship. eSports events are now filling the gap in sports events. Many game developers, who have filled huge arenas with their eSports championships in recent years, are now simply continuing the competitions online.

Not only the most popular eSports events are streamed live, but also several Bundesliga clubs and Formula 1 are now taking part in challenges and duels in online streams. Real Formula 1 stars such as Max Verstappen, Lando Norris and Chalres Leclerc have competed against Streamer and Youtuber in the F1 2019 game. These duels are now even broadcast live by the German TV rights owner Sky.

The whole thing is based on a major advantage that eSports have over classic sports: the games do not require the participants to meet physically in one place, as they can simply be played online at home on the console or on a PC.

Although eSports have been focusing on major events and tournaments in recent years, such as the League of Legends World Championships and the Global Offensive Major Championships, cancellations of these events do not stand in the way of hosting them.

With the increasing professionalisation of eSports, rising sales and a steadily growing audience base, many companies are asking themselves whether and how they should get involved in the eSports industry. In principle, the target group is open-minded towards sponsoring: 86 percent of fans are in favour of sponsors in eSports, as a study on the subject by PWC shows.

Sponsors can only be successful if they have a well thought-out strategy and a solid understanding of the eSports scene. The brand message only gets across if both the players in the scene and the fans feel understood by the sponsors.

It shows that this is a particularly important factor for successful sponsoring:

For successful sponsoring, companies must adapt their marketing activities to the eSports community. Concepts should be developed in which the fans are activated by an added value. Traditional advertising concepts, e.g. commercials featuring professional eSporters as testimonials, tend to lead to disinterest among the young target group. In addition, companies must not forget that the individual eSports games and genres differ greatly from one another – and so do the respective fan groups.

With our expertise we can help you to select suitable eSports teams and develop an optimized marketing strategy.

Jasmin Jüttner: “Now or never, this is a once in a lifetime opportunity”