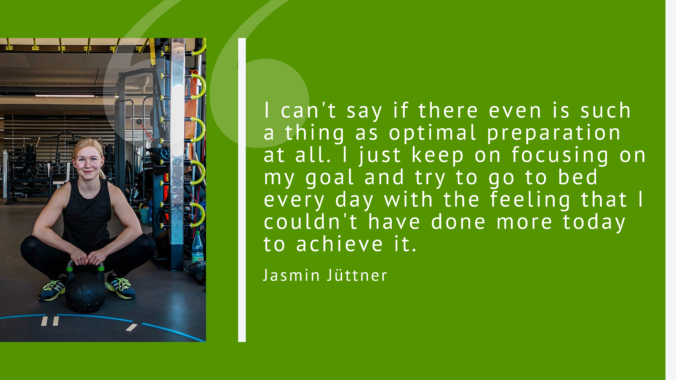 Jasmin Jüttner: “Now or never, this is a once in a lifetime opportunity”

Karate is olympic for the first and probably also for the last time at the Olympic Games in Tokyo, which have been postponed to 2021. The 26-year-old Karateka Jasmin Jüttner tells us about this special opportunity in her career – about her dream, discipline and a never-ending passion.

Sponsoo: How did you start with kata?

Jasmin: My parents used to do Taekwondo and my dad also was a huge Bruce Lee fan. When I was seven years old, I wanted to do more sports, but I was actually thinking of ballet and tutus rather than karate and belt colors. When my dad read an ad for karate training in the newspaper, he was so excited that I went to the trial training a week later, and the rest is history. The discipline of kata that I practice is a martial art. It involves a fixed sequence of techniques called Kata. It depends especially on correct technique, speed, strength, elegance and expression. After the performance you will receive a technique as well as an athletic evaluation from 7 judges.

Sponsoo: What was supposed to be so special about the year 2020?

Jasmin: Karate is olympic for the first time, and unfortunately also for the last time, which means: Now or never. A unique chance! Moreover, there are only 10 athletes worldwide per category.

Our qualification already started in June 2018 and was originally supposed to be finished by mid-May this year. Almost two years in which we travelled from country to country and from competition to competition every 3-4 weeks. The pressure was enormous, the travelling nerve-racking and the tension had to be kept up permanently.
As I have not yet qualified over the last 1.5 years, there was only one last chance for me: The Olympic Qualification Tournament in Paris from 8-10 May this year. I’ve only thought about this one weekend the past 22 months, where I finally wanted to prove that I’ve earned my ticket to Tokyo. Unfortunately, everything ended up differently than planned.

Sponsoo: How did you feel when the Olympic Games were postponed to 2021? Did you wish for a faster, earlier cancellation or do you agree with the decision of IOC President Thomas Bach and Co.?

Jasmin: Postponing the Olympic Games was the only right thing to do and a logical consequence. I had expected that a postponement would be decided and announced earlier, but I can also understand that at first a lot of people wanted to try to make these games happen. In the end it was no surprise and the right decision.

Sponsoo: What consequences did the postponement of the Olympic Games have for you personally?

For some weeks there was a lot of uncertainty and I was under temendous straint. But now I see it as an opportunity and I think that the postponement could turn out good for me. In a year’s time I can still get a lot out of my training to really give my best in 2021.

I also appreciate the fact that as a sports soldier in the Bundeswehr’s Sports Support Group I will continue to receive the same support as before. The support of the German Sports Aid and the Sports Foundation Hesse will also continue as usual. That takes a lot of pressure off and I know that not everyone is as lucky as I am.

Sponsoo: How do you continue training? How much does the corona crisis affect your daily training?

Jasmin: The absolute advantage of my sport is that you can do karate almost everywhere. Sure, there are better places to train than in front of my bedroom mirror, but it does work. Together with my coaches I adjusted my plans quite quickly, so that I mostly train outside at the moment.

Sponsoo: Do you think that you can prepare optimally for the planned Olympic Games in 2021?

Jasmin: There are still a few months until the Olympic Games in 2021. After all, we athletes are allowed to train again at the federal bases and I have the feeling that they are trying to help us through this crisis as best as they can to support us. Other sportsmen, like swimmers for example, are certainly affected more by the current situation.

I can’t say if there even is such a thing as optimal preparation at all. I just keep on focusing on my goal and try to go to bed every day with the feeling that I couldn’t have done more today to achieve it. This means optimal preparation for me: To have the certainty of having done everything possible, no matter what the circumstances.

How sponsoring works within an online football manager