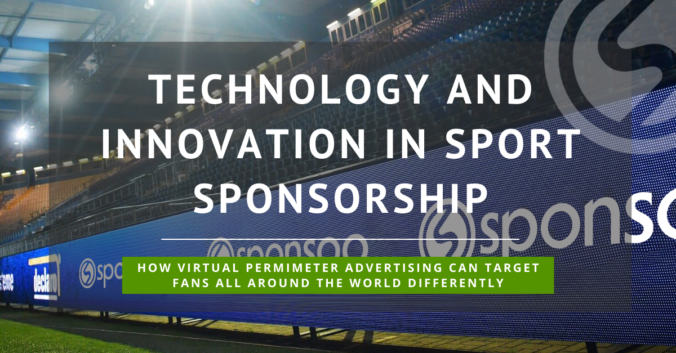 Imagine being based in Germany, watching a soccer match on TV and seeing the advertisements on the banners at the side of the field which are a huge thing regarding sport sponsorship in many sports and stadiums. So nothing new, right?

But what if someone told you that those advertisements on the banners changed from location to location depending on the country in which you live? Sounds innovative? It certainly is.

Basically, the technology that virtually shows the advertising on perimeter boards now can include LED technology which emits invisible infrared light which can’t be seen by human eyes. Possible to be seen and selected by cameras, the advertising data shown in the stadium gets cross-faded into other advertising messages ready to be shown on TV.

So while the Fans in the stadium see advertisements on the perimeter boards, Fans watching from different countries will see other advertisements which fit their region. (Source: Forbes).

What is the idea behind all that?

So, the desired targeting level of customers currently corresponds to the main geographical target group of their sport. There, demand for sponsors and advertising is high.

That means, in a La Liga game, for example FC Barcelona vs. Real Madrid, there are at least 8 feeds for different broadcast zones in the world – some of them are regions like the Middle East, North Africa and Latin America. (Source: CoffeeBeans).

Not only soccer matches like the Bundesliga matches but also other sports and leagues with huge international audiences want to follow the trend of virtual perimeter advertising like the NFL, NHL and NBA. (Source: Forbes).

Outlook for the future

Concerning individualised advertisements, virtual perimeter advertisements enable new avenues. For the future, augmented reality digital replacement in sport will be targeted much more personally. This is possible with the use of the same data models and ad-tech technologies being used in many other digital sectors. (Source: CoffeeBean).

We think that this technology is definitely a great innovative way for sport sponsorship possibilities and that brands should definitely use this way of advertising more in the future.

What the New NIL Movement Brings for Future Sponsorship Possibilities

What is the Future for Fan Tokens in Sport?